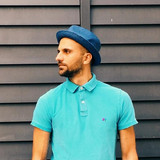 Andy Host is a singer, songwriter and musician from Germany. In November 2017 Andy has released his first single called “Heartbeats”. It´s the first release from a series of songs called „louder than gray“.”I tend to write rather melancholic songs. The title of the project is meant to help myself to write songs that affirm life and break through the gray melancholy of everyday life.“ Louder than gray reflects Andy’s musical spectrum that is based on a symbiosis of authentic acoustic instruments and spherical digital sounds. The German songwriter not only writes the songs, but also composes and produces them by himself. The sound and songwriting are influenced by pop bands like Coldplay and Kodaline or folk bands like Mumford &amp; Sons: “For me, writing songs is like a chemical experiment: You need to combine different ingredients hoping they will somehow react. The big difference to chemicals – you want the mixture of sounds to blow up and especially to blow your mind.” In the age of 16 Andy founded his first award winning pop-band, in which he initially started writing his own songs. While working successfully as a marketing professional in different companies, Andy has been part in different bands and projects as singer and guitarist and simultaneously professionalized his recording skills. “Heartbeats” is the starting point for a new journey, both for Andy Host and fans of an atmospheric, sound-driven pop music.