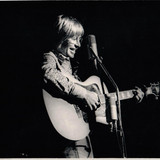 John Denver earned international acclaim as a songwriter, performer, actor, environmentalist and humanitarian. His career spanned four decades and his music has outlasted countless musical trends, earning numerous awards and honors. Fans responded to heartfelt urgings about ecology, peace and compassion that were consistently delivered in a gentle manner on his records and at live performances. Urged to change his name, young Henry John Deutschendorf, Jr. took his stage name from the capital of his favorite state. Later in life Denver and his family settled in Aspen, and his love for the Rocky Mountains inspired many of his songs. Denver experienced his first break when he was chosen from 250 hopefuls for the popular Mitchell Trio. He gained recognition when Peter, Paul & Mary recorded his song “Leaving On A Jet Plane,” their first and only #1 hit. As the Mitchell Trio disbanded, Denver climbed the pop charts as a solo act with songs like “Take Me Home, Country Roads,” “Rocky Mountain High,” “Sunshine On My Shoulders,” “Annie’s Song,” “Back Home Again,” “Thank God I’m A Country Boy,” and “Calypso,” solidifying his position as a top star of the ‘70s. John Denver died tragically in a plane crash on October 12, 1997. Today millions of fans enjoy the work of this extraordinary performer, and the music is as relevant as ever. His humanitarian work continues to strengthen our global village, and his dynamic celebration of life, spirit and nature is a powerful inspiration to all