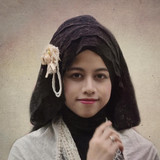 is a singer/songwriter, composer, producer, and scientist/educator. Born in Jakarta, she is a classically-trained pianist. She learned classical piano at the age of 5, and grasped other musical instruments; recorder/tin whistle, guitar, and classical violin during her childhood. Vanya2V started composing songs by the age of 10 years old and learning to do her very own home recording in her early teens. Her musical journey embarked as she joined the choirs, gothic-rock bands, and orchestra, which shape her music character. Since 2011, Vanya2V has lived in Europe where she enjoys watching musicals, operas, and orchestra concerts. Vanya2V also borrows inspiration from any style that crosses her path -- elements of folk, pop, dance, jazz, and rock can be heard in her first album 'Princess Minuet'.