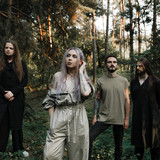 IGNEA is a Ukrainian melodic metal band that mixes heavy riffs with symphonic, electronic, folk elements, and story-telling creating a powerful OST-like experience. Staying true to the melodic essence of their music, IGNEA also adds touches of brutality by occasionally incorporating extreme vocals, breakdowns, and blast beats.  Highlights: — 1 EP, 2 full-length albums, 4 singles, 8 official videos, — released the first-ever original song from a Ukrainian band, recorded with a full symphonic orchestra — 'Alga' (over 6 million views on YouTube) — according to the national awards The Best Ukrainian Metal Act, The Realms of Fire and Death has been selected as the metal album of the year and IGNEA has been named the best Ukrainian metal band of 2020 — being fully DIY, IGNEA gathered an extensive following of fans from all continents of the world — ‘The Realms of Fire and Death’ album was fully funded by the band’s patrons at www.patreon.com/helleignea — all releases recorded and mixed at Morton Studio (also working with Jinjer) In June 2021, IGNEA signed a deal with Napalm Records and started working on the third album that is planned for 2022. Before bringing the new full-length record to the world, the band will treat its fans with the singles recorded in early 2021, as well as some other surprises.