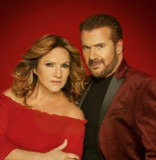 The Argentine duo of Lucía and Joaquín Galán, collectively known as Pimpinela, have had a long and hit-filled career, growing up together, recording their first album in 1981, and never looking back as their popularity in the Spanish-speaking world snowballed. The two share vocals and co-writing credits on many of their songs, which blend Latin pop with the influence of musical theater and telenovelas. With over a dozen albums to their credit (not even counting compilations), the Galáns show no signs of slowing down in the new millennium. ~ Steve Huey, Rovi