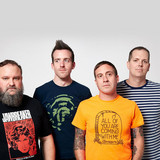 American Television is a Washington DC area melodic punk band. Their debut LP, Watch It Burn, was released on Wiretap Records in January 2020. Described as a cross between The Copyrights and The Loved Ones, the band is high-energy up on-record and on stage. The band has found ways to remain active during the COVID-19 pandemic by releasing covers, raising money for causes around the globe, and contributing to and producing their own online streaming events. American Television will play Fest 19 in Gainesville, FL in October 2021, but hopefully, they'll be back at it before then.