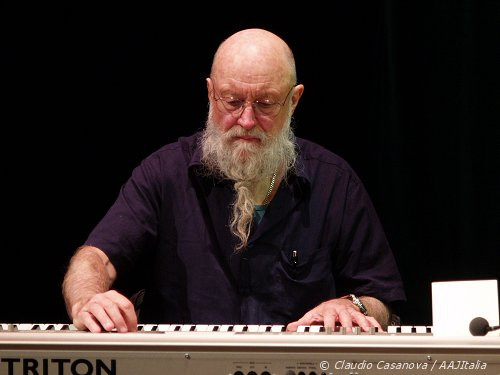 Terry Riley is an avant-garde composer who was present at the birth of the idea that became known as minimalism. Abandoning his original plans to become a concert pianist, Riley studied composition at San Francisco State College with Robert Erikson. In 1958, while supporting himself as a ragtime pianist at a local saloon, Riley attended graduate school at the University of California at Berkeley. It was at Berkeley that Riley met and felt a strong connection with fellow composition student (and, some would argue, the real father of Minimalism) La Monte Young. After graduating with an M.A. in composition in 1961, Riley moved to Europe, where he performed in officers' clubs. In 1963 Riley composed the music for the play The Gift, written by Key Dewey, for the ORTF (French National Radio). Riley used the opportunity to utilize a new invention known as the time-lag accumulator. It consisted of two reel-to-reel tape recorders connected together to form a loop of layered echoes. According to Riley, Music for the Gift was "the forerunner of In C," utilizing repetition as an essential part of musical form. Riley's direct inspiration for In C occurred back in San Francisco while riding a bus to work at the Gold Street Saloon. Released in 1968 by Columbia Records, In C became a platform upon which the Minimalist movement was built. At that point Riley was living in New York, collaborating occasionally with La Monte Young, and performing in Young's Theatre of Eternal Music. It was during this period that Riley stopped notating his compositions and focused more on improvisation. He also abandoned the use of his time-lag accumulator. Riley was able to experiment with his "self-interpretive improvisation" techniques on his 1969 album containing the works Poppy Nogood and the Phantom Band and Rainbow in Curved Air. During the 1970s, Terry Riley began to focus on Indian music, studying with singer Pandit Pran Nath. Traveling often to India and teaching Indian music at Mills College in Oakland, California, Riley found a new compositional angle for his music. Influenced by the raga, Riley began to create long, flowing melodic lines using raga-related scales in his improvisations. He also began to take interest in just intonation, an ancient form of tuning in which the intervals are mathematically pure, allowing for intervallic intricacies. Works from this period include Persian Surgery Dervishes (1971) and Shri Camel (1976). In 1979 Riley received both a grant from the NEA and a Guggenheim Fellowship for his creative efforts. In the 1980s Riley returned to musical notation, composing several works for the Kronos String Quartet. Works such as G-Song and Sunrise of the Planetary Dream Collector (1981) call for string quartet, voice and synthesizer. The pieces draw very little upon the layering of structural motives as found in Riley's works of the 1960s, or the keyboard improvisations characteristic of the 1970s. Instead, Riley's string quartets are more lyrical and include influences of American jazz, Indian raga, and traditional Classical music -- continuing, as well, in the Minimalist style. Yet no work of Riley's has had an impact equal to that of the groundbreaking In C.