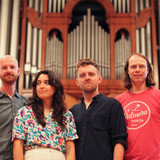 Playing a home show still feels special for The Beths, who have orbited in the fertile music scene of Auckland’s Karangahape Road since they were teenagers. Lead vocalist and guitarist Elizabeth Stokes, lead guitarist Jonathan Pearce and bassist Benjamin Sinclair began playing shows in 2015, quickly winning over local audiences with a low-key approach that disguises a drive for excellence. After building a loyal following through live performances and their 2016 EP Warm Blood, The Beths signed to Carpark Records and released debut album Future Me Hates Me in 2018. That album, full of fast riffs, catchy-as-hell hooks and self-deprecating lyrics, catapulted the band straight into a lengthy international tour that saw them support legends like The Pixies and Death Cab For Cutie as well as headlining increasingly large shows of their own. Drummer Tristan Deck, who had played with Pearce on other projects, came on board in 2019 during this wave of touring. Jump Rope Gazers (2020) was a slower, yearning follow-up that still fizzes and sparks with pop-punk sensibilities, and was immediately seized on by both fans and music critics as a bright spot during a dark year. It was named Album of the Year at New Zealand’s Aotearoa Music Awards in 2020, and saw the band secure awards for Best Group and Best Alternative Artist for the second year running. Auckland, New Zealand, 2020 is the band’s first live recording and showcases the infectious energy they bring to every performance.