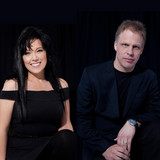 Cewineye is a duo with Angie & Johan Lindblad. Cewineye are composing, producing and performing their own songs and all their released music is available on iTunes, Amazon, Spotify and YouTube. Johan Lindblad is a Lead Guitar Player that got his roots mainly in the Rock Music as well as in Jazzfusion and Spanish Guitar. He has been touring full-time between 1989-97 all around USA with his own former band Sincity and together with, among others, the CBS Recording Artist Carmel Watters and the Guitar Wizzard Greg Howe (Michael Jackson’s former Sideman/Guitarist) and they made several Radio- and TV-performances. Back in Sweden again in 1997 he has worked both with Studio-Recordings as well as live performances. Johan is playing all instruments on the CD Album "Acoustic Vibe" which is mixed and produced by Johan. Angie is a Lead Singer attached by the Celtic Music and Rock Music. She has performed live in Stockholm Jazz Festival, Pubs, Bellman Museeum and Festivals, Kungsträdgården Scen and in Gotland and has also been on small tours in Scotland, England, USA and in Ireland. She began writing songs in 1996 and has been doing it ever since. She made a jingle for a short-film that’s been sent on National Television in Sweden (SVT), and been doing both Radio-, and TV-performances in SVT, National and Local Radio. She sings the Lead and Harmony Vocals and Arranges them on the CD Album "Acoustic Vibe". Angie has written all the songs and the lyrics on the CD-Album "Acoustic Vibe".