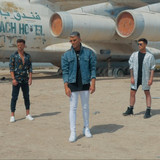 Formed in the 2012 edition of the U.K. X-Factor series, four-piece Union J had originally started life as Triple J. After a successful audition, Triple J -- consisting of members Josh Cuthbert, JJ Hamblett, and Jaymi Hensley -- reached the group battle but were beaten to the judges' house round by GMD3. After fellow group Rough Copy had to leave the show due to visa issues, Triple J were brought in as a replacement with the addition of another contestant, George Shelley, to make the group a quartet. Renamed Union J, the four-piece went on to the semi-final, where they were eliminated. Signing a deal with Sony subsidiary RCA Records at the end of 2012, the group released their debut single, "Carry You," just six months later. In 2013, Union J released their self-titled, full-length debut album, featuring the single "Beautiful Life." ~ Rich Wilson