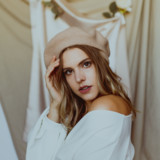 Coming from a musical family, Angie Petty was destined for a career in music. She grew up in Salt Lake City as a competitive dancer winning national titles and later began diving into music through a program called School Of Rock. In 2013, Angie began singing professionally as a performer at Lagoon Amusement Park for 4 consecutive seasons. But it was at Snow College where she honed in on her vocal skills and was exposed to classical, jazz, composition and production. She received a Bachelor's degree in Commercial Music with emphasis in Vocal Performance from Snow College in 2018.   Angie’s sound has been described as pitch perfect paired with a dark full rounded tone, sensitive use and attention to timbre, color and emotional presence. Her performance credits include working with David Archuleta, Kurt Bestor, Jon Batiste and Philip Lassiter with writing credits under Warner Chappell. As a natural performer, Angie commands the audience’s attention with every performance. Her sound has been compared to artists such as Raveena, Gretchen Parlato, Marie Dahlstrom and even Ariana Grande.   Angie released her debut album “Timing,” a 7 track body of work exploring patience, self love, deep emotional acceptance with dreamy romantic themes. The album has been well received and even landed her song “Love Letter” on a Spotify editorial playlist.   Visit angiepetty.com for more!