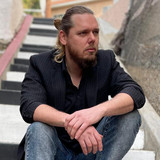 Roman Kovalik is a classically trained and an award winning composer for film and television. He is best known for his modern writing style, dramatic sensibility, and sleek music production skills. He has scored a dozen feature films including the award winning "Butterfly Caught", "Please Come with Me" and "Beyond the Trek” which won "Best Original Score 2016" at the International Independent Film Awards. Roman began his career as a composer for local theater productions in his native Switzerland. Discovering his passion for music in the visual arts, he moved to Boston and earned his B.A. in Film Scoring and a Certificate of Excellence in Composition from the prestigious Berklee College of Music. Since 2006, he has lived in Los Angeles and continues to work on award winning movies. For more information and music, please visit www.RomanKovalik.com