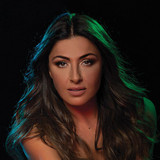 Helena Paparizou is a Greek singer, born and raised in Sweden. From 1999 until 2003 she was a member of the duo Antique (Eurovision 2001 - 3rd Place) In 2005 she won the Eurovision Song Contest with the song My Number One, marking Greece’s first and only win so far. Paparizou has released 10 albums, all being certified platinum and double platinum. She has also released 52 radio singles and 58 music videos. She has collaborated with great artists of the international music scene as well as with very notable Greek artists. Helena has won 43 awards: 3 Arion Awards, 1 EBBA Award, 1 Balkan Music Award, 1 Cyprus Music Award, 1 MTV Best Greek Act Award, 1 OGAE Song Contest Award, 3 Super Music Awards, 30 Mad Video Music Awards, and of course the first place at the Eurovision Song Contest. She was a member of the judge panel of the show Dancing On Ice (2011-2012) in Greece and of the Inför Eurovision Song Contest (2016) in Sweden. She has also took part in the Swedish version of Let’s Dance (2012) and in 2015 she made her theatre debut in the musical “Nine”, playing the part of Saraghina. Since 2016 she is one of the 4 judges of The Voice of Greece, and in 2018 she released her album Ouranio Toxo which went platinum in Greece, being the best selling album by a female artist in 2018. Her new album Apohrosis topped the Official Greek Charts, being one of the most popular releases for 2021.