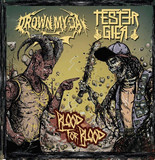 The band was formed in Cracow, Poland in 2006. In 2007, after a few line-up changes the Cracow's quintet released its first demo containing three songs. Drown My Day started to play more and more remarkable performances with the bands like Pro-Pain, Death Before Dishonor, L'esprit Du Clan and others. In 2008 "One Step Away From Silence", the EP containing five compositions was brought to daylight and it was released by polish label Spook Records, linked mostly with the hardcore scene. The next two years resulted in playing the first concerts abroad. Drown My Day besides Poland started to perform in countries like Czech Republic, Slovakia and Hungary. The next EP, entitled "Forgotten" was released in 2010. The mini album containing four new songs and two sullen interludes enabled the band to perform at more significant festivals and to go on a professional tour. In 2011 the guitarist Maciej Marendowski announced his withdrawal and he was replaced by Sławomir Wojtas. With a slightly refreshed line-up, the band shared on the Internet their new single, "Undead God" which became a trailer of the oncoming full-lenght album "Confessions”. The record is due to be released in April 2013 by NOIZGATE Records. Drown My Day skillfully mixes modern death metal with the metalcore's groove, making their music more versatile and not sticking strictly to any of the genres.