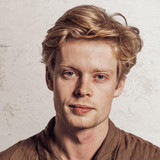 Jim van der Zee, born in the Netherlands, is a passionate artist and songwriter. He is active in genres such as pop, folk, jazz, soul and blues. Jim is known for his low warm voice, intimate personal songs and stunning performances. Inspired by his father, who played songs at his bedside, Jim started practising guitar at the age of 6. Later he studied vocals and guitar at the conservatory. In the summer months, Jim spent his time travelling through Europe and America. It was on these trips that he developed his down-to-earth character and a talent to perform for all audiences. Jim learned to build crowds of up to 350 people in any square in any city. Using his old camper as a portable home, Jim managed to live from the gifts thrown into his guitar case. After playing at bars, surfcamps and on the streets for years, Jim decided to share his music with a larger audience. In 2017/2018 he joined

“The Voice of Holland”. Since becoming the winner of the show Jim has been the centre of attention. Jim and his band started to tour around the Dutch festivals and played at venues such as Concert@Sea, the Amsterdam Gay Pride and for the Dutch royal family at Kingsday. On top of that, Jim released his first album “Where I Come From”, an album filled with songs from the legends that inspired him. To record his latest album, Jim built a professional studio in his home in Amsterdam. This gave him the independence and freedom needed to compose his new album "Starting The Engine".