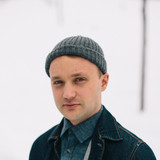 Ben Noble is a Minneapolis-based artist and producer. He released his debut album Whisky Priest in the Spring of 2017. Fully self-produced and recorded in a cabin, Whisky Priest is a journey of exacting introspection. Noble loves the contrast of serene, innocent melodies with a haunting chorus of falsetto voices. A sea of guitars and strings adds cinematic qualities, creating a drama of darkness and light. Whisky Priest wrestles with the desire to create a good world for those he loves while facing the fact that there is a nagging darkness in him that will never go away. Noble’s follow-up album Where The Light Comes In is a major expansion of the sonic palette, introducing drums, synthesizers, electric guitars, and much more to Noble's signature melodies and textures. It is as much a sonic experiment as it is a heart-rending search for answers to questions of grief and the cyclical nature of trauma. Noble also creates music as Lake Union, Glass Echoes, Hi Noon, Solset, Midnight Moonlight