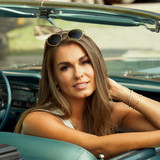 Named a Taste of Country Artist to Watch and a CMT “Next Up Now” artist, Tiffany Woys grew up being influenced by powerhouse vocalists such as LeAnn Rimes, Faith Hill, Celine Dion, Michael Jackson and Carrie Underwood. As a child, she’d look for any opportunity to get up and sing in front of people, and by the time she hit 20, she was recording an independent album and hitting the road. After honing her stage presence by performing relentlessly at venues and events up and down the West Coast, often for more than three hours at a time, she followed her dreams to Nashville. In the short three years that she’s called Tennessee home, Woys has already recorded songs from some of Nashville’s most prolific songwriters, like Mickey Guyton, Emily Shackelton, Shane McAnally, Trevor Rosen, Nathan Chapman, Chris Dubois and more. She followed up her 2019 debut EP, Tiffany Woys, with songs “Hostage,” "Loved By You,” “Do Ya” and “I Don’t,” all making their mark on Billboard’s National Country Radio Indicator Chart.