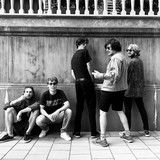 Surfing Stingrays is a psychedelic indie band from Amsterdam consisting of the Netherlands' four most dangerous lunatics. They met each other in high school and quickly became best friends, mainly because of their mutual love and interest in psych and indie rock music. Their self-produced debut "Surfing Stingrays EP" was released in February 2018. Influenced by the likes of modern indie and psych-rock bands like Tame Impala and Pond, as well as old-timers like The Beatles and The Kinks. In 2018 they started to record their debut album at Helicopter Amsterdam which features heavier and more psychedelic songs. "Guilty Pleasure Dream Car" was released on March 15th 2019. After a small hiatus, the band started working on their sophomore album "Red Pill Society" mid-2019. The recording process started at the end of 2019 at SAE with the help of producer Spike Barton, but soon after, the COVID-19 pandemic hit and the recording and writing process of the album came to a halt. During the lockdown, the band wrote four quarantine songs. The first one, "So Far Away (Feels Just Like Yesterday)", was released on August 28th 2020, the second one, "Cold Skin Swimming Pool", was released on November 6th 2020 and the two remaining singles will be released very soon. Now with the lock down lifted, the recordings of the second album are continuing with a release date for "Red Pill Society" yet to be announced. Guitar - Nemo Bass - Iwan Drums - Arthur Vocals/Guitar - Petya Producer - Spike