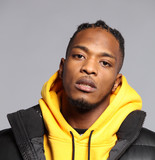 Niska is a young 25 year-old rapper from the Paris suburbs. Already having strong success with his past records (and accumulating millions of views on his videos), he permanently marked the French musical landscape in July 2017 with his single “Reseaux”. This smash taken from his album “COMMANDO” became the biggest hit of the year with more than 200 million views on YouTube. After this success, some international artists started to hear about the song that was already being played in a few English clubs.