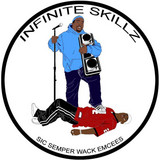 Infinite Skillz is a throwback.

Not in the sense that his style is outdated, but because his music is timeless. He is entertaining whether he is telling a story or proving a point. Infinite brings a message to the party and some fun to the thinkers simultaneously. This allows him to reach young listeners as well as folks who were teenagers when Hip Hop began. As a middle child with a history of peacemaking, he aims to increase social harmony through Hip Hop with his original yet throwback sound. Like many of his fellow military brats, Infinite has learned to relate to all kinds of people. This skill has translated musically into storytelling that resonates with fans from all different walks of life. Perceptive listeners can hear a mix of southern and east coast influences that comes from partially growing up in Northern Virginia and attending school at Morehouse in Atlanta, GA. The work ethic he has displayed in pursuit of his goals has already helped him gain considerable attention. He has earned song placements with ESPN, Under Armour, and the Tampa Bay Rays. Infinite was named by the readers of the Tampa Bay area Creative Loafing magazine as the 2012 Best local Hip Hop act just a year after winning the critic's pick. He won the same award again in 2014. .