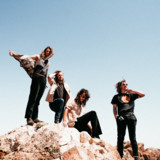 a true powerhouse of modern day Australian rock & roll, best described as, “four mates playing their instruments loud & live.” Touring more-or-less non-stop since 2015, they have certainly exceeded recent expectations, selling out every capital city they've visited and showing no signs of stopping. Doubling as Triple J’s Feature Album in November 2019 upon its release, The VANNS debut “Through the Walls” was a true demonstration of their storytelling and songwriting abilities maturing. With huge songs such as ‘Mother,’ ‘Deranged’ & ‘Fake Friends’ delivering on their stadium filling sound, ‘Jules Said’ acts as a counter balance with it’s raw honesty, whilst the emotional slow-build ‘Chelsea’ has developed an almost cult-like following amongst fans. This success saw The VANNS arrive with their first Triple J Like A Version. Tackling Bon Iver’s ‘Hey, Ma’ standing on its own whilst doing the original justice, with 3 Million streams across platforms to date. Starting off opening for the likes of Ocean Alley and Catfish And The Bottlemen, The VANNS have found themselves being main stage staples at festivals such as, Big Pineapple, Party In The Paddock and Yours & Owls. New single 'Feels Good Now' out now.