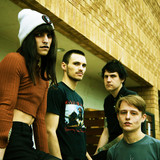 Formed in 2016 - SeeYouSpaceCowboy, based out of Los Angeles, is a metalcore band that wears its influences on its sleeves while simultaneously challenging the grain of current hardcore. In implementing things such as sass vocals,

dissonant dance melodies, and visceral breakdowns, SeeYouSpaceCowboy is able to pay homage to the greater era of MySpace and scene music while also being able to bring something new to the table at the same time.