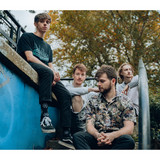 New single Cardboard Box out now! Bath-based alternative punk quartet Squidge have been honing their craft for some years, taking the scene by storm in 2017 with the release of their debut single ‘Disappear Reappear’, collecting tens of thousands of streams along the way. The group have since released a catalogue of explosive and emotive songs that coast through the alternative spectrum, leaving their own stamp on punk, alt-rock, post-hardcore, emo and grunge.

Devoted performers, crowdsurfs, moshpits, full-room singalongs and an arena-like mentality are common themes for any Squidge gig. The band have shared stages across the country with a range of fellow alternative heavyweights including Sick Joy, Muskets, Phoxjaw & Beans on Toast with extensive gigging intended for 2021 (COVID permitting). Despite the challenges presented by the COVID-19 pandemic, Squidge have expertly retained relevance with a series of live lockdown renditions of some of their previous releases as well as a cover or two. On November 26th 2020, Squidge reiterated their integrity as musicians and performers by playing a full production live-streamed gig from Komedia in Bath to a virtual audience, sharing the stage with fellow South West alternative band Medway in support of the non-profit mental health community group Heads Above The Waves. This performance is available for viewing on the band’s Facebook page, while the lockdown renditions can be found on the Squidge YouTube channel. © ℗ | Squidge