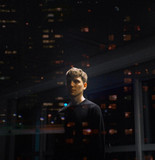 Minneapolis – on the one hand, that’s a city in the midwest of the United States. On the other – and in some way these things will be connected – it is the name of a band that not too long ago attracted the internet’s limelight with its song “The Park”. You heard a pop hymn in the purest sense, and immediately realised: that’s a hit. And now that it’s been called for what it is, one should add that there are indeed several layers shimmering through the otherwise so vacant, so meaningless plastic surface of pop here. Because nothing seems calculated or even arbitrary with this one. Minneapolis’ songs never try to curry favour with the listener, they keep them on their toes, yet simultaneously transfer the feeling of dancing at just the right bar in just the right moment – or sit in just the right car on the road to nowhere. Despite all these sweet melodies, verses and choruses your ears won’t forget that easily, you can make out a certain conflict, a crunching, creaking, buzzing, and humming – something that complicates things and breaks with oh so familiar stereotypes. A crack, a rift not only running through the music of Minneapolis, but also through that one city of the same name in Minnesota.