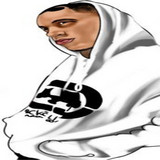 ECHO is a Dominican, spanglish speaking emcee that incarnated in New York City, and migrated to Los Angeles several years ago. He has visions for what a better world looks like, and he plants these visions into his music, so that he can reach the 7,576,274,589+ people on Earth, which will hopefully help change the world as we all know it, forever. He constantly is sharing everything he’s gone through & has learned with the world via his website, his Twitter and Instagram accounts, songs, published books, blogs, music videos, v-logs, etc. He lives by the motto “expect nothing but, accept everything”, and leads/entertains by example.