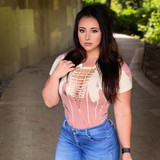 Jesslee skyrocketed to national recognition after turning both Blake Shelton’s, and Kelly Clarkson’s chairs on NBC’s The Voice. Since her appearance on the national television show, Jesslee has shared the stage along side notable artists including Thomas Rhett, Cole Swindell, Kane Brown, RaeLynn, Craig Campbell, and countless others. Jesslee aggressively tours both in the United States and internationally headlining and appearing on festivals in France, Spain and Denmark, while playing some of the BIGGEST main stages in the American country music scene. Jesslee has already seen unprecedented success on social media having eclipsed over 3 million video views in only 4 months! She has reached 5.7M + ORGANIC impressions with 1.1M + reactions in fewer than 28 days during August/September. Jesslee's engagement is consistently outpacing every country act but Luke Combs. Jesslee has appeared as a feature on CMT, and has astoundingly charted 45 weeks in 2019 and 2020 on Apple Music’s “Country Hot Tracks”! Trace Adkins said of “Jesslee, “I like female vocals that are just powerful just pow sit you back in your seat.“ Kelly Clarkson had similar things to say about Jesslee. She was quoted as saying, “Jesslee is amazing, she is a phenomenal singer”. Her manager, Steve Virginia says, “Jesslee is flat out the best female vocalist I have ever heard live! Mark my words, JessLee will be one of the greatest of all time.”