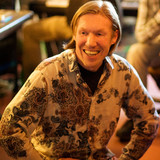 Nosie Katzmann is one of the most successful german hitauthors. For the sound of the nineties he wrote the songs which helped dance projects such as Culture Beat, Jam&Spoon, Scooter and many more to climb the international charts. Over 40 international chart-hits, millions of sold CDs and dozens of gold- and platinumawards – his career is a true superlative. As a songwriter Nosie Katzmann was the creative force behind some of the biggest worldwide hits from that era: “Mr. Vain” from Culture Beat, “More And More" (Cpt Hollywood) and many more. Even then, he took a very minimalistic approach to songwriting. His guitar, a tape recorder and his voice were all that he needed to create timeless songs. Thus, the solo material, which sounds like cover tracks to most listeners, is actually the exact opposite: Nosie Katzmann is bringing his hits home to the environment in which they were created, without frills and gimmicks. Intimate, personal, in his very own way. The interpreter is Nosie Katzmann himself. In addition to his very own singer songwriter versions of his Greatest Hits, he opens a treasure chest of tunes in his “Songbook” series and always surprises with brandnew songs.