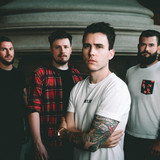 Catch My Story is a metalcore band based in Switzerland and was founded in 2013. The band creates a mix of heavy rythms and melodic choruses with catchy riffs. With their music, they want to give voice to those deep thoughts and feelings we often put aside and keep for ourselves. After their last EP "Resilience" CATCH MY STORY recorded and produced their brand new album at "Homeless Records" in Marseille with Florent Salfati of the band LANDMVRKS(FR) in March 2020. The first single "Nothing Lasts Forever " Feat. Florent Salfati (LANDMVRKS)" was released on September 23rd. Followed by the second single "Sickness" which was released on December 4th. And now their third single "Reprogram" just dropped on February 19th. Their upcoming album "Into The Sun" will be released in August 2021.