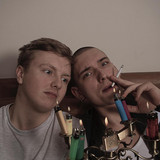 EARLS are an up and coming two piece made up of Anthony Lamb and George Prosser, long time friends who met at secondary school in the West Midlands. They describe themselves as "Skum" punk. Their songs are simple, powerful and memorable. Anthony plays his guitar in a unique stripped back style while the drummer, George, holds everything together with primal, aggressive beats. The lyrics to EARLS songs vary in topic from ‘toxic masculinity’, ‘being skint’, ‘anger management problems’ and ‘just wanting to get drunk’. They formed in September 2015 shortly after moving to Leicester for university. Neither of them graduated. They spent the first two and half years of their career gigging and building a fan base in the Leicester scene until EARLS released their first single ‘We Are Skum’ in 2018 produced by Joey Whelan. Shortly after, they were picked up by independent record label EARWIG RECORDS and the band and the label started working towards their debut album release ‘Cardboard Palace’.