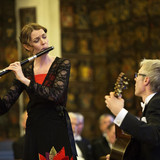 The Haga Duo was founded in 2010 and soon made a clear impact. With their fondness for an intimate format, they invite their audiences into intimate personal encounters with chamber music. Humor, curiosity, and a love for music lead to a strong concert experience, regardless of whether they play works from the 19th century, tango, or new compositions. They perform frequently and have toured in Australia, England, Estonia, France, Lettland, Norway, Portugal, and Sweden. The Haga Duo’s interest in new music has resulted in a number of first performances. In 2013, these included works by Mattias Lysell, Benjamin Staern, Emmy Lindström, Fredrik Holm, and Jim Chapman. In 2015, works by Mauro Godoy-Villalobos, Mirjam Tally, Andrea Tarrodi, Daniel Nelson, Anders Emilsson, and Zita Bruzaite were added. In 2017, the Haga Duo will give first performances of works by Anders Nilsson, Anna-Lena Laurin, Jan Levander, and Erik Hanspers. The Haga Duo consists of the flutist Sareidah Hildebrand and the guitarist Joakim Lundström. They have released three CDs: Footprints (2013) with tango, raga, and folklore packaged for flute and guitar. The Secret Room (2016) was conceived as an introduction to music appreciation for children. Colors of Sweden (2017) is the duo’s third recording. This time the focus is on newly composed Swedish music.