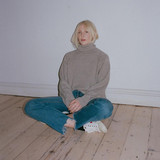 Taking much of the production reins herself, alongside long-time collaborators Ethan Johns and Dom Monks, Song For Our Daughter comes at a major crossroads for the London-based songwriter who’s already earned Grammy nominations, Brit Awards, and Mercury nods en route to becoming a wholly singular voice in the modern recording industry. In the wake of touring behind 2017’s Semper Femina, Marling stepped away from both her record label and her management, and for the first time found herself without any firm idea of her future, ready to distance herself from the idea of being Laura Marling. To achieve this, she chose the unexpected: collaborating with the theatre director Robert Icke, putting out an acclaimed dissonant melodic electronic record as the duo LUMP, and she also enrolled in a masters degree in psychoanalysis. The effect of exploring beyond her familiar world — her collaborative experiments and academic studies particularly, has been to liberate her, and the music on Song For Our Daughter is among the most spacious, affecting, and overall best of her entire career.