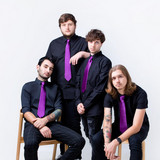 Unafraid to be honest, One Last Daybreak have made a name for themselves through their energetic performances, raw and catchy melodies and emotional lyrics which cover topics such as heartbreak, trauma, abuse and the hardships of life. From releasing their debut EP ‘A Thousand Thoughts’ in April 2018, the Emo quartet embarked on their first tour, performing at prestigious venues across the UK followed by taking part in Quebec City's Envol Et Macadam Festival, alongside prolific bands such as Parkway Drive, August Burns Red and The Devil Wears Prada. In October 2018, they joined the Halloween spirit with ‘The Midnight Society’ - two songs taking influence and referencing Stephen King’s IT and Hannibal Lecter; quickly amassing a following on online media outlets such as Spotify. This was followed with another UK tour with IMMERSE, as well as playing the popular London club venue 'Facedown'. Their brand new EP, 'Maybe Tomorrow' pulls on the heartstrings of those that have experienced trauma and loss. With each song representing one of the Kübler-Ross stages of grief (Denial, Anger, Bargaining/Depression and Acceptance), 'Maybe Tomorrow' tells a story of how one copes with grief and the journey they must undertake to find happiness once again. For those who feel alone, those who have experienced loss, those who feel unloved, those who wonder when they will start to heal, when the anchor will finally be lifted; Maybe tomorrow. Emo Revival is here 💜