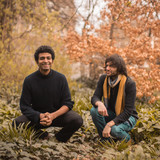 Featuring August and After

Built on a close friendship between singer-guitarists Ned Mortimer and Vedantha Kumar, August and After’s indie-folk style lies somewhere in the indefinite space between the playful and the thoughtful. Their acoustic core - a product of their mutual love of classical guitar and their beautifully complementary voices - is couched within richer layers of classically inspired orchestration and electric guitar and drums. The outcome is a sound that rings of a richer, punchier Kings of Convenience or Fleet Foxes. The duo were crystallised as August and After when they moved from Cambridge to London in 2012 and started to grow a loyal fanbase with a series of sold out London shows and the release of Embers, a collection of home-recorded songs, along with a number of mini tours across Europe. This led to support from BBC Introducing and a residency at Ronnie Scott’s in Soho, allowing them to collaborate with a stream of talented classical musicians and they recorded their debut Cascades EP in Paris, releasing it in 2016. The EP saw them featured on several official Spotify playlists with several million online streams in countries across the world and earned them a nomination in the inaugural Unsigned Music Awards and a full interview feature in the culture section of the Independent. The duo have since been honing their songwriting and working on their follow-up record, continuing their partnership with Parisian producer Jonathan Lefèvre-Reich.