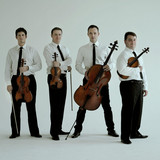 Since the ensemble's founding in 1993 and subsequent 1996 debut, the four Israeli musicians have embarked on a journey of growth and maturation. This journey has resulted in a wide repertoire and stunning depth of expression, which carries on the string quartet tradition in a unique manner. The ensemble has found its core in a warm, full, human sound and an egalitarian balance between high and low voices. This approach allows the quartet to maintain a healthy relationship between individual expression and a transparent and respectful presentation of the composer's work. It is also the drive and motivation for the continuing refinement of its interpretations of the classical repertoire as well as exploration of new epochs.   The Jerusalem Quartet is a regular and beloved guest on the world's great concert stages. With regular bi-annual visits to North America, the quartet has performed in cities such as New York, Chicago, Los Angeles, Philadelphia, Washington, and Cleveland as well as in the Ravinia Festival. In Europe, the quartet enjoys an enthusiastic reception with regular appearances in London's Wigmore hall, Tonhalle Zürich, Munich Herkulessaal, Theatre des Champs-Elysées, as well as special guest performances at the Auditorium du Louvre Paris, the Elbphilharmonie Hamburg and festivals such as Salzburg, Verbier, Schleswig-Holstein, Schubertiade Schwarzenberg, Rheingau, Saint Petersburg white Nights and many others.