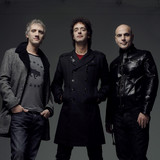 Soda Stereo were one of the most important Argentine pop/rock bands of the '80s and early '90s. Created as a trio in 1982, the band was formed by guitarist/vocalist Gustavo Cerati, bass player Zeta Bosio (born Héctor Bosio), and drummer Charly Alberti (born Carlos Ficcichia). Their influence spread to the rest of Latin America during the band's heyday, and a successful reunion in 2007 proved the endurance of Soda Stereo's popular sound. The group was initially influenced by new wave music and such bands as the Police, Television, and Talking Heads. Like those groups, Soda Stereo embraced an ever-changing style that was based on pop but often explored elements of new wave, ska, reggae, soul, noise rock, and electronica. Image was also important to the band, whose members concerned themselves with video clips, shows, clothing, and graphic design. It's impossible to explain the renaissance of the Argentine rock movement in the early '80s without mentioning the return of democracy after seven years of military government in 1983. Although Soda Stereo did not sing about political topics, they emerged alongside a new political situation, which aligned them with bands like Virus and Los Twist. Out of all the bands that emerged from that post-dictatorial rule government, Soda Stereo were by far the most popular and enduring. With their first album, 1984's self-titled Soda Stereo, they reached national success with ironic lyrics and a mix of pop, reggae, ska, and new wave. The following album, Nada Personal, strengthened the popularity of the band with songs like "Nada Personal" and "Cuando Pase el Temblor," which helped open the doors of the Latin American musical market. Such success was amplified in 1986 when they released Signos, one of the best albums of their career. National press outlets began to take them seriously, and Soda Stereo embarked on an extensive tour through Latin America that resulted in the live album Ruido Blanco. In 1988, the band traveled to New York to record their fifth album, Doble Vida, which was produced by David Bowie's guitarist Carlos Alomar. The trio used horn arrangements to inject the album with elements of soul music. The record was followed by the EP Languis, a minor work that did well commercially. The year 1990 represented a successful upgrade in Soda Stereo's career. With its emphasis on raw guitars, Cancion Animal signified a change in the band's sound and helped their popularity reach its peak. An important part of that change was due to the inclusion of Daniel Melero, an Argentine techno/pop pioneer who renewed the band's sound and attitude. He was dubbed "Soda's fourth" during those times. By the end of 1991, the band had played to 250,000 people in Buenos Aires' streets and edited the EP Rex Mix, which contained some songs extracted from live shows and a new studio track. In the beginning of 1992, Gustavo Cerati and Daniel Melero released the delicate duo album Colores Santos, which combined some experimentation with synth pop songs. The overly experimental Dynamo also arrived in 1992 and proved to be Soda Stereo's most controversial work, as well as the lowest seller of their career. After that the band reached an impasse with some solo projects, such as Cerati's Amor Amarillo. Dissolution rumors began to make the rounds, but the band soldiered onward for several more years. In 1995, they were on the road again, releasing their calmest and most relaxed work, Sueño Stereo, followed by an MTV Unplugged album entitled Comfort y Música Para Volar. The acoustic-oriented release juxtaposed classic songs performed live (with some electric instrumentation) with several outtakes from the last studio album. However, personal problems between the members had increased with 15 years of coexistence, and the band embarked on its farewell tour in 1997. One decade later, Soda Stereo reunited for a string of highly successful shows, two of which were documented on the live albums Gira: Me Veras Volver 1 and Gira: Me Veras Volver 2. Sadly, after mounting a successful solo career, Gustavo Cerati had a stroke that left him with brain damage after a concert in Caracas in May 2010; he lingered in a coma for more than four years before passing in September 2014. The platinum Sep7imo Dia, an album of remixed Soda Stereo songs used in a series of tributes produced by Cirque du Soleil, was issued in 2017. ~ Iván Adaime, Rovi