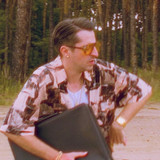 [fʊlkrəm] On the tipping edge between mainstream & underground, Eastern Europe suburbs embossed artist FVLCRVM is a celebration of unpredictability. ADHD distorted production of niche club genres meets mellow pop musicality with reinvented 90s vibe. Borrowing a name from a mad Russian jet fighter FVLCRVM found a form in inconsistency. His rebirth from a producer to a singer songwriter came with the song Hi!, which ended up in the best 100 tracks of 2017 on Spotify's renowned Fresh Finds Playlist. With his most recent follow up Words Loose Meaning EP, FVLCRVM offered a crisp and eloquent take on pop music and provided the viewer with a peek into a mind-blowing version of a dystopian future. The track “Words” caught attention of Kevin Cole who crowned it a KEXP's Song of the Day 2020 as one of the few singles from Eastern Europe. His live shows are burning the bridge between a DJ set and vocal/instrumental performance and this crosslink will be heavily reflected on his upcoming 5 track EP.