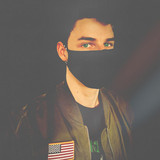 "Just once I'd like to wake up with more time on my hands than hours in the day." SoundCloud : 2359 YouTube : 2359Music SnapChat / BandCamp : x2359x From the Carolinas, largely influenced by a range of genres, artists and mediums which is reflected in my music. From the indie influenced The Songs I Never Knew to more trap based songs like Stranger Things. Current heavy influences include blackbear, Juice WRLD, Young Thug, Kevin Gates and, of course (old) Taylor Swift. A lot of the production is my own and I record, mix and master everything at home. Production credits include PLAGUE, GAARA, Out Of Love, The Dark Era by ONI INC., S'more Yellow by BRYOZA and Oldies by Almighty Blessing.