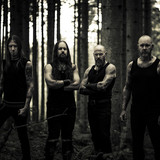 Founded in 2008, King of Asgard is a Swedish Viking metal band formed by former Mithotyn members Karl Beckmann (guitar/vocals) and Karsten Larsson (drums). Along with Lars Tängmark (guitars) and Jonas Albrektsson, who joined after the initial duo recorded their 2009 demo Prince of Märings, the band explore their Norse roots with a blend of black metal, doom, and traditional influences. Although their sound never veers into the more medieval waters of folk metal, the influence of the past has left its mark on the band's epic and brutal work. King of Asgard made their full-length debut in 2010 with Fi'mbulvintr, and returned two years later with a follow-up, To North; both albums were released by Metal Blade Records. Their third album, the bleak and powerful Karg, arrived in July of 2014. Following the band's departure from Metal Blade, they delivered 2017's mighty :taudr:, their first release for Swedish label Trollmusic. ~ Gregory Heaney, Rovi