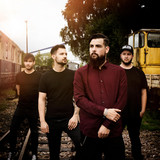 The lights are fading. Everything's quiet. A bang. A wall of energy leaps into your face. Your foot starts tapping. Ecstasy. Everyone's jumping. You join in. You haven't felt this good for a long time. That's what happens when Indecent Behavior hit the stage. As energetic as their live show, as versatile are their songs. Between fast beats, distorted guitars and melodic vocals, there's always a spark that you just can't let go. Modern punk rock is the language Indecent Behavior use to shout their deepest wishes and messages into the world. Elements of punk rock, metal, hardcore and pop are combined, which characterize the sound of the band since its foundation. The 4 guys from Saarbrücken aim high. Since 2013 Henrik, Chris, Flo and Denis never left out a stage. Big and small. Quiet and loud. After their own concert series, countless shows in tiny german venues, 2 EPs and the first album OUTNUMBERED (2018), the band toured Germany in 2019 as the support act for Saltatio Mortis and played 13 concerts in venues like the E-Werk in Cologne or the Pier2 in Bremen, followed by shows with bands like ZSK and Ignite. The second record BRIGHT DAYS (2020) connects seamlessly. Indecent Behavior is punk rock. Indecent Behavior is energy. Indecent Behavior is hope. And it's just a hell of a lot of fun.