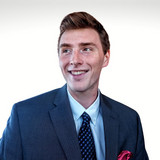 Kale Johnson is an American Jazz/Americana Singer, Songwriter and Musician who has thrilled audiences all around the world with his definitive baritone vocals behind either a swinging or ballad choice of song. Being a self proclaimed "Old Soul", Johnson takes inspiration from older styles of music to create new music for a modern generation. With this unique approach in mind, Johnson continues to create an authentic and enjoyable listening experience for all of those who listen.  Born and raised in California, Johnson showed interest for music at an early age but didn't begin publicly singing and playing music until age 17 when he performed for his high school's prom TV special. From that moment on he knew music was his calling purpose in life. He had a short stint as a vocalist and pianist for the high school's jazz band before becoming a session guitarist for the Sacramento City College Jazz Band while he attended school at the institution. Johnson sings and trained himself in a style of singing called "Bel Canto" which translates to "Beautiful Singing" in English; an operatic approach allowing for greater breath control and phrasing. Along with his vocals, Johnson plays rhythm/lead guitar, piano, and bass. A true entertainer in the utmost degree, Johnson leaves no audience unmoved. "The audience comes first, always. You have to connect with them in a way that speaks to them as people and then make it count." - Kale Johnson