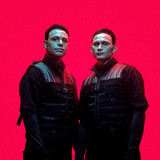 twocolors are full of contrasts, just like their hometown, where they met in 2015 and immediately began to release music via their own, independent imprint, before signing to Virgin Records Germany/UMG in 2020. The creative synergy of twocolors consists of Pierro and Emil, both musicians, songwriters, producers and visual creators who were both born and raised in Berlin. “We live in the stronghold of electronic music. It is part of our DNA. The clubs, the different styles, the people - all of that inspires us.” Their major-label debut

“Lovefool”, an infectious rework of The Cardigans’ classic, has surpassed 210 Million Spotify streams and generated over 1.3 Billion streams globally. Their next single “Bloodstream” (released March 12, 2021) – written with Hight and René Miller, received immediate global DSP support; added to 35 Spotify NMF playlists and graced the cover of the “mint” playlist on day of release. Their newest single, “Passion” , firmly anchored in their own blend of retrospective, yet modern house music sees them setting sail for yet more danceable waters. Showcasing their futuristic play on 90s-era-synth-sounds and armed with an infectious female vocal and a mesmerizing hook, “Passion” brings a retro futuristic vibe and a bassline guaranteed to heat up any dancefloor. This is only the beginning. twocolors are here to stay.