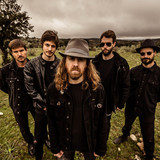 LUBACK is a roots-rock band from Madrid (Spain), looking up to Eric Clapton, Tedeschi Trucks Band, Bob Dylan, Led Zeppelin, Delta Moon, Tom Petty, Marcus King, Vulfpeck, The White Buffalo, Larkin Poe, The Wood Brothers or their neighbours Anaheim. “Music should be a tool to give what we are, to tell things that matter and to try to change the world”. Since 2011, LUBACK's developed its personality until they've reached a distinctive identity. After “Inminente” (2014), a fast and deep evolution touched by an americana nature resulted into their second record: “Relative Keys for Vital Subjects” (2016). "The Deal" (2019) took root in a pure organic bright style. In 2020 and 2021, the singles "Need (live at Ahalik Studios)", "Heat, Flames And Fire", "Beware" and "Black Cat" shook the media before the official release of their new album. "The Measure Of The Step" (March 2021) shows in 12 songs a range of what they considere modern-classic rock and, over all, it's a stunning record that proves the continuous growth of their music. Naturalness and band concept are the mainstays in their style and DNA. United by a special chemistry, their live shows give off a unique and mighty energy. The music, worked out with thoroughness and soul, packages lyrics which try to be deep, philosophical, torn, ironic and, over all, very vital. Beauty, pain, contradictions, undeserved luck, the system or changing the world are just some of the concerns that weave the essence of LUBACK.