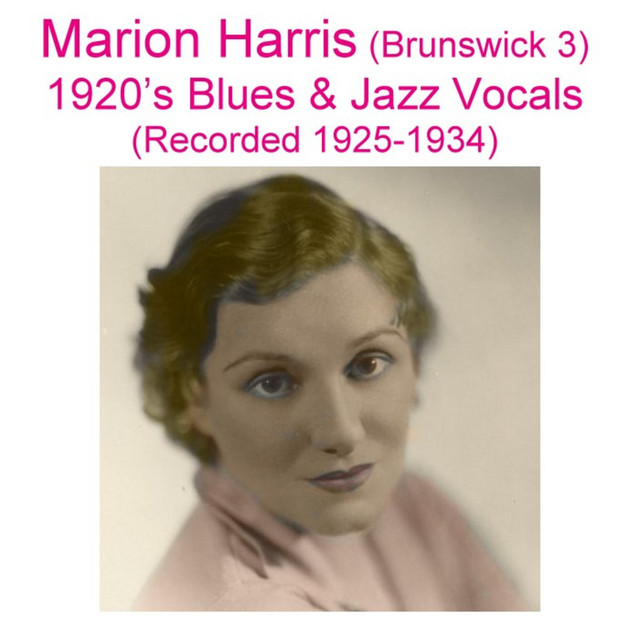 A hitmaker who was recording before the end of World War I, Marion Harris sang a Broadway version of the blues several years before it had cracked the commercial consciousness, near the end of the 1910s. In that, she was a harbinger of the Jazz Age, although her hits dried up by the mid-'20s, and when she died in 1944 she had been long forgotten. Still, Harris was among the most popular singers of the '20s, and her versions of "St. Louis Blues," "Tea for Two," and "Look for the Silver Lining" were the most successful of the era. Born in 1896, probably in Indiana, Harris made her first professional stop in Chicago, where she played vaudeville and accompanied silent pictures with her voice. Her singing made an impression on the famed dancer Vernon Castle, who enabled her entrance into the New York theater scene; she debuted in a 1915 Irving Berlin revue titled Stop! Look! Listen! and also performed with Florenz Ziegfeld's famous Follies. By 1916, Harris began recording for Victor, and one year later she enjoyed her first hit -- "They Go Wild, Simply Wild, Over Me." She could belt out a strong theater blues, like Layton-Creamer's "Eveybody's Crazy 'Bout the Doggone Blues, But I'm Happy" (also a hit), but she tempered those brash titles with ballads such as "After You've Gone." Also, she continued performing in vaudeville, but at a much higher caliber than in Chicago, touring the nation with a top billing. Meanwhile, her personal life was much less successful than her professional career. Her 1920 marriage to actor Bobby Williams was tempestuous and lasted only one year; a later marriage collapsed after her husband was tried on rape charges (the alleged victim was appearing with Harris in a play). Her lone attempt at going Hollywood, the 1927 film Devil-May-Care, was a flop, and she withdrew from her next theater show because of an undisclosed illness. Harris spent the next few years in Europe, often performing in cabaret, but never appeared again professionally after the mid-'30s. Until 1944, the last year of her life, she lived in London with her third husband; the effects of the blitz may have caused the "neurological disorder" that caused her to travel to New York for treatment. Although she was discharged two months later, she died soon after in a hotel fire that started when she fell asleep while smoking in bed. ~ John Bush, Rovi