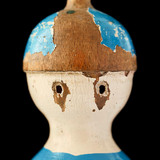 Dusty Stray features the alt-folk-noir repertoire of Texan songster Jonathan Brown which delves into universal themes of unrequited love, heartbreak, loneliness and death but (almost) always with a small dose of hope and redemption. Though the name may evoke a country or Americana feel, Dusty Stray has always played with genres to the point of defying clear categorization. Brown often combines acoustic folk with old-school electronic instruments, ethnic instruments and a wide assortment of toys to create a palette all his own. Brown was born in Taiwan in the Summer of Love. Grew up in Texas as son of a preacher man. Raised on songs about death and resurrection. Discovered vast archive of early American folk music from the 20s and 30s in college. Began writing his own songs. Moved to Austin where he first performed his music. Traveled with guitar through Central America where he met a Belgian woman and followed her to Europe. Met a Spanish woman. Moved to Barcelona. Formed a bluegrass band, a psychedelic rock band and a freak folk band. Met a Dutch woman. Moved to the Netherlands and began to focus on Dusty Stray. He remains there today (with the same Dutch woman). Brown has collaborated with many artists through the years including Kramer, Ken Stringfellow, JB Meijers, Janne Schra, Jon Tarifa, Meredith Wilder, Gert-Jan Blom and Pilote. His other project at the moment is VeldHans. The sixth Dusty Stray album will be out in 2022.