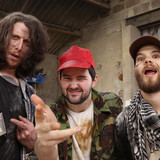 Over several years building a strong foundation in Cumbria, becoming a regular at festivals such as Kendal Calling, Solfest, and Eden Fest, Beachmaster have honed their sound into a mature alternative rock tinged with elements of punk, folk and pop. In September 2017 they released their debut album 'Strength in Numbness' to a strong local reception and, over the course of 2019, released 4 singles amidst several UK tours and festival appearances. After a hugely successful Kickstarter campaign, Beachmaster recorded their second album 'Mass' in May 2021, and the album is now scheduled for release on September 24th.