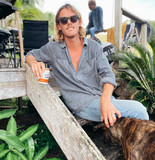 Hailing from the small coastal town of Port Lincoln, South Australia, Luke journeyed to Byron Bay in 2012 to pursue his exciting music career. What began as performing to a small bunch of close friends and family turned into much more after the release of his debut album Sugarcane Road. Luke hit the ground running releasing several EP’s and singles, followed by his sophomore album Maybe We’re Just Running Home. He set forth to play national headline shows and supported artists such as The Rubins, Mia Dyson and Bubsy Marou. The artist has racked up almost 60,000 monthly listeners and over 2,800 followers on Spotify with tracks of his featuring on major Spotify playlists and Triple J. The Aussie singer has been busy at work this year releasing singles King Of The Highway, Lay Everything On Me and Lady Luck. In just over a month, his latest release After All This Time has scored almost 50k streams and counting! The artist’s soul-soothing soundtrack irradiates a beautiful summer’s day, drenched in nostalgia with Bob Dylan sensibilities. Kick back, relax and escape to total tranquillity as Morris’ dulcet harmonies enchant you. Luke is making the most out of these strange times, performing sessions in his cosy living room overlooking Bryon Bay’s stunning mountains – and we cannot think of a more suitable backdrop for his music. To stay in the loop with his latest releases and updates you can head over to his website and follow him on Facebook, Instagram and Spotify.