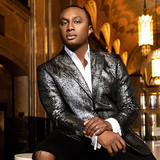 Evrod Cassimy is an R&B/Pop singer/songwriter and TV news anchor in Detroit, MI. At the age of three his parents encouraged him to sing in church and that's where his love for music began. He continued to sing and eventually write music as a teen and in college. Because of his love for writing and storytelling, Evrod is a TV News Anchor for the NBC station in Detroit, MI.   In 2018 he released his debut album, Newzic. The first single Turn It Up was also played on every radio station in Detroit, MI. Newzic was released as the first project from Evrod's new music label, Everything Evrod Entertainment. His sophomore album Just Evrod features Evrod's friend, the late Queen of Soul, Aretha Franklin. The third single from the album, Fake, can be heard on radio across Metro Detroit.   Evrod's third album "E3" is available Oct. 29! It features the singles Good Enough, Mama, This Song, U Know, U Know and more! Follow Evrod Cassimy here on Spotify to hear new music first.