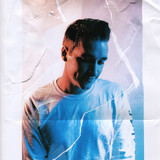 Originally a bedroom producer from Philadelphia, Louis Futon has made a name for himself as an established artist/producer as well as a talented live performer. Known for his weavings of hip-hop, R&B, and soul styles into his fresh sounding works, the now LA based Artist has garnered over 150+ million streams across his singles and remixes, as well as another 10 million from unofficial flips of popular mainstream tracks. Having toured North America with three mostly sold out headlining tours as well as performing at key festivals such as Coachella, CRSSD, Made In America and more, Futon is no stranger for taking his music to big stages. Futon has joined fellow electronic artists ODESZA, GRiZ, and Louis The Child on the road providing support with his popular multi-act live show. 2019 saw the release of his debut album, Way Back When, which saw Futon bring his diverse production talents to a whole new level, with tracks featuring artists like NoMBe, DUCKWRTH, Ashe, RKCB and more. The album has racked up more than 45 million streams to date across all platforms. 2020 is set to be a pivotal year for the producer.