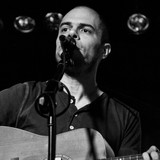 Foreign Dog is the nom de plume of Charlie Calleja, a singer/songwriter from London, England. His self-released second EP, LET'S ALL GO TO THE PARTY, came out in May 2018.   After growing up in the punk rock scene, Charlie spent the autumn of 2008 in Los Angeles recording his debut solo album with Joey Waronker (Beck, Atoms For Peace) producing. The album featured performances by Josh Klinghoffer (Red Hot Chili Peppers, Dot Hacker), Priscilla Ahn, Zac Rae (Death Cab for Cutie), Inara George (the bird and the bee) and Marjorie Fair. A few of the songs could be heard on some TV dramas in the US, but the album never saw release.   Charlie spent the next few years working on various projects, but he kept his distance from writing and performing music. While spending some time in Melbourne, Australia, he caught the bug again and Foreign Dog was born.