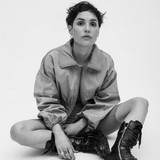 RUBIO is the personal project and artistic experiment of the renowned chilean drummer, producer and front-woman Francisca Straube. Emerges in early 2015 and mixes Pop, Hip- Hop, Electronic, Ambient and Ethnic music elements. During 2017, she came up to share - as a personal journal- a continuous series of five double singles, produced jointly with producer Pablo Stipicic and

released by Jungla Music. “R”, “U”, “B”, “I”, “O” in 2018, followed by “La Llamada” and “Fábula”, embodies its first album: PEZ. In 2020 is announced the search of a fruit, with two previous chapters in EP format: “La Pérdida” and “La Existencia”. International sessions in BEATS-1 and KEXP, and live presentations at festivals such as Lollapalooza, Primavera Sound, Indie Week, Ruido Fest and Nrmal, stand out as the main highlights.